Hey guys, I hope you are all doing well this week!?

Recently during some of my exercise classes I've found that I've been getting blisters on my third and fourth toes and my feet just weren't feeling particularly great! I can't actually recall when I bought my trainers but I know I made the mistake of choosing based on looks rather than purpose. 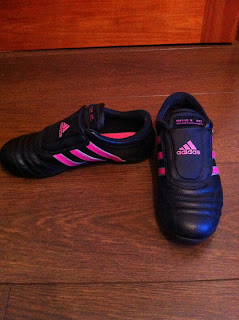 You can see that the trainers are very flat and have no support as such for the feet. However, I did find them generally comfy and also bought a matching white pair. Yet at the time I don't recall doing anything particularly strenuous in them so they have been more than adequate until now!

So, I decided to go to a store where I knew they would give good adivce on what footwear to go for, based on the activities I do. I had an idea that I needed some sort of 'running' trainers as I've heard these tend to be the most supportive when exercising. My dad, a jogger of around 5 years, has always been a fan of Asics trainers for running...but I wasn't sure about the reasoning behind this. What's the difference, right?

I arrived at the footwear section and noticed a treadmill beside the serious trainers. I was surprised to find that I would infact have to run on there, to determine what footwear I needed! How embarrassing! My dad didn't make things any better by announcing that I "run like a girl"...hmm I am a girl, Dad?!

So the woman/assistant brought me some trainers to wear whilst on the machine. I'd sensibly come in dolly shoes ha! I usually take a size 5 in shoes, such as heels and ballet pumps etc, but I guessed I'd need a bigger size in trainers. I opted for a 6, yet ended up in a 7 after my toes touched the rim in the 6's. Big feet or what?!

Attractively, after being told to pull up my jeggings so she could see my ankles, I got on the treadmill. I only had to run for about a minute but I felt ever so self conscious knowing that I was closely being watched by the special camera! It was hilarious to see my feet running in slow motion on the screen... and not so funny seeing the rest of me wobble. Nice!

The woman pointed out how my left foot can be classed as normal in terms of the way it lands and remains fairly neutral. However, my right foot isn't so well behaved and overpronates. I asked her what this means and basically pronate is when the arch of the foot flattens to land. To overpronate the foot rolls slightly inwards. Apparently it can be quite serious and she was surprised I hadn't felt any discomfort before. Eventually she said it would have caused pain behind the knee and shin pain, in the wrong attire. In more serious cases it can cause shin splints which is extremely painful, forcing you out of exercise for quite some time. My Dad said that he had shin splints before and it was excruciating! It turns out that both of his feet overpronate which is the reason for why his trainer choice is important. Asics allow for overpronation in their footwear, which is why my Dad selects them.

Now in terms of my feet, obviously only one of them requires attention, so to speak. Therefore she suggested that I buy insoles, wearing only the right one in my trainer. 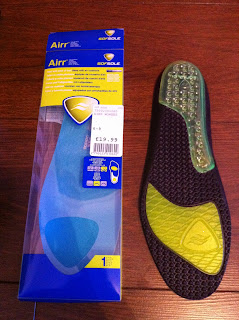 She suggested these insoles. You can see the support in the heel with the gel like material. She showed a normal insole of a trainer, which was flat and cardboard looking. Apparently they cost around 50p to make and are the cheapest part of a trainer. No wonder they aren't very supportive!

Next I had to choose my new trainers. This was heavily dependant on what would be best for my feet, and insole. I was surprised to see a lot of them were about £60-£80, and with the insoles being £20 it would be expensive! Lucikly though the trainers I had been wearing to run on the treadmill had been reduced to £34.99, and as I'd found them comfy, I was happy to go with them. 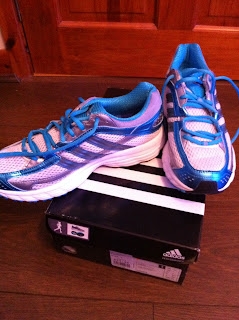 So the colour wouldn't have been my first choice. I'm more of a pink sort of gal, but hey ho. Funnily enough they are Adidas brand, again. What is it with me and Adidas?...but make really didn't matter to me so long as they were a good fit and comfortable.

I figured I would try them out at aerobics last night, without bedding them in. A slight mistake...they were generally comfy until about 40 minutes in and then the insole in my right foot began to rub a bit on the side of my foot. I'm hoping that this will go away once the trainers have been worn a little more! But, on a plus, no blisters =)

So, all in all I was very happy with my purchase. I'm extremenly glad that I decided it was time to get some new trainers because I hate to think what could of happened if I had kept overpronating in the wrong footwear! Weirdly she said that it can also cause headaches!...not what you want whilst working out really is it!

After my experience I would recommend going to test your feet out and getting the right footwear if you do a lot of activity. It will serve you well in the long run! ( No pun intended, haha!)
Posted by Unknown at 05:19