Hello. Hope you are all well. I'm still a little stiff from Thursday's classes...see the Boot Camp post! ;)

So a friend also following the Weight Watchers plan recommended that I try butternut squash. Yes, in my 22 years I haven't tasted the vegetable...I take it it is a veggie?! Haha. Given that the thing is propoint free I figured that it would be worth a try!

Hunting these suckers down was tricky...it seems only larger supermarkets around me stock them! And after it being out of stock at one big store, I located it at another. Finally. 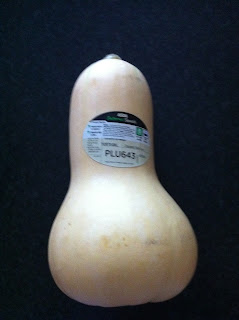 It cost me £1.13 to be precise...I got a large one it seems. When I got it home I realised that I didn't actually know how to go about preparing it?! So I called upon my trusty pal, Google, and discovered that cutting it in half then peeling it is advisable. Brilliant, I am the world's worst peeler...no joke! :/ 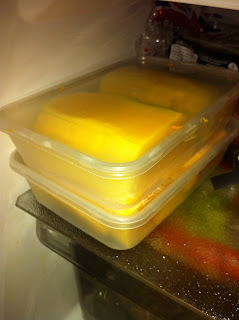 Eventually, after a massive struggle peeling the damn thing, it was prepared. I stored what I didn't need in these plastic containers and put them in the fridge. By the looks of it I'll be having butternut squash for the forseeable future! Let's hope I like it. 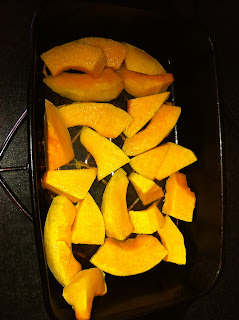 I chopped some of the butternut squash into quite large chunks, as apparently it shrinks when cooked, and put them into a oven tray/dish. I then lightly sprayed them with Fry Light cooking oil (no propoints) and put them in the oven, preheated at 200 degrees.

I left them the oven for a good 20-25 minutes, turning them over half way through. I didn't get a picture of them fully cooked but they didn't look much different to the above picture. I tested them with a fork to see that they were soft. Their texture resembled chips or potatos and I was surprised to notice that they also tasted akin to chips. Result. I lightly salted them and added them to my dinner of chicken and baked beans.

I definitely cooked too much and left about a 1/3 of the chunks. I found the butternut squash really enjoyable in a small quantity but it did become a little sickly after a while. Next time I would perhaps leave them longer in the oven to crisp. But yes, there will definitely be a next time!

I'd say, if you're looking for something healthy, propoint free if you're a WW member/follower or something to resemble chips without any of the guilt, then give this a try! It won't be everyone's cup of tea, so to speak, but you won't know until you've tasted it!

Pleasantly surprised :)
Posted by Unknown at 11:56