So I'm a little bit sore today...ok, I'm stiff as a blinking board! Eek! It seems that perhaps trying out Boot Camp and then following it with another exercise class (Step n Core) was probably quite ambitious to say the least! However I felt I gave both classes 100% and at the time I had a blast :)

What was Boot Camp like, you may ask? Well, surprisingly enjoyable. There was something very motivating about two 'fit' men, shouting at you to do more and push harder!

Prior to starting the class I was a little nervous, I have to be honest. But I made sure I spoke to some of the women waiting, afterall they are the experts after clearly attending the session each week.  I was somewhat assured by their postivity towards the class, but I still had no idea what it would consist of. One member said it was similar to circuit training and I nodded as if I knew what that was. I've never done that either!

We were told to stand, abruptly, by the instructors. One poor lady was talking, although standing, so she got a very loud shout in her ear! Was pretty funny really though, perhaps not so much for her burst eardrum haha!

We started by running in a long line around the room. I should mention that there were 15 of us doing the class, so not a bad turn out! And I was 1 of 3 whom hadn't been before. We added various arm movements in, as instructed, as we ran. We were then briefed on what numbers 1 to 4 would mean, whilst still running around. Getting pretty tired now! 1 meant touching the floor with the left hand, whilst 2 with the right hand. 3 was both hands and 4 was a jump and change in direction. The leaders fired the different instructions, speeding it up towards the end of the run. Thankfully after probably 5-10mins we did stop running!

Then I think we stretched a little bit and were told we could get a drink. It was strange that we had to be told when to drink, heavens for bid if you just went on your own accord! But weirdly I liked this setup.

We were then devided up into two groups. One group was standing in a line, whilst the others were on the mats. Both groups were facing one another. The instructors also spilt to lead one of the groups. I was on the mats first and we were shown 3 different types of floor exercises. For example, a basic sit-up, touching the heels whilst on the back, and lowering the knees up and down etc. We then had 3 minutes, 1 minute for each exercise. In which time the group opposite had 3 standing exercises to do. After the 3 minutes were up, we swapped sides and did the standing exercises; a lunge using only the right leg, a lunge using only the left leg and a bend with both legs. During the exercises the instructors would shout to encourage you to push and to not give up. It worked. Again we were instructed to grab a quick drink.

Next we were put into pairs. As I didn't know anyone this could have been a bit awkward. However, my partner was really nice and it wasn't too bad. I'd say that she was one of the fittest there so I did joke about not being as 'good' as her. Person number 1 had to lie down on their backs ready for full sit-ups whilst person number 2 had to hold their partners feet. Boy could my partner do sit-ups! It was a bit weird at first holding a strangers feet down, but it became normal. No.1's did 1 mintue then it was swap time. Luckily I've never been too bad at sit-ups and as my stomach hadn't been worked in a while I found the minute relatively easy. I think we repeated this process again, before grabbing a drink.

Still in our partners, No.1's were told to head for the mats, whilst us No.2's were told to line up. My partner had to hold a 'plank' for as long as it took me to run the length of the hall and back, twice. Great, planking is my weakness! For any of you that don't know what a 'plank' looks like... 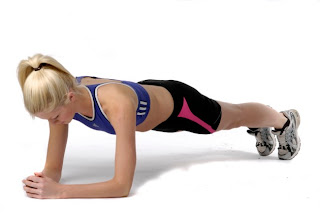 This woman clearly makes the plank look easy, but try it out and you will soon discover how hard it is to maintain! The key is, is to make sure your bum is down...if it's up in the air then you're cheating and it will feel easy!

Anyway, my turn. Like I say, I had a fit partner so she ran quickly. Thank god! And I found the first plank surprisingly easy. Perhaps after practicing the plank so often in Aerobics and Core, I'm actually getting the hang of it?! Unfortunately we had to repeat this process 4 times! Although I still was feeling strong at this point.

Another drink stop and then we again spilt into two groups, with like before, one group allocated to the mats whilst another group standing. We were given 3 new 1 minute exercises and this time they were definitely much harder! The hardest one on the mats was basically a sit-up but your legs also had to come up, straight into the air. I'm getting tired now! The standing exercise were harder still I thought, with a lot of getting down onto the floor and jumping up. Ouch. Finally drink time.

Now, I'm not sure if this came next or before the previous activity but again we had to hold feet down and do full sit-ups but with a twist to each side, before repeating the process. This was a killer! Luckily we only did this once though, before starting the plank/running activity again. By this point the plank hurt big time and I was shattered. My stomach muscles have never been worked so hard and I was starting to feel it. We repeated the planking/running a total of 3 times.

After a much needed drink, we began to start the cool-down part of the class. In a line we followed the instructor; jogging, side stepping, weaving in and around the hall in whatever direction he chose. We gave our arms a good stretch, still following the line and then gathered in the middle. We lay down and did some floor stretches and then stood back up to further stretch the legs. Done...oh wait, only another 1 hour class to attend! But who's fault is that?! I have no one else to blame bar myself.

Actually though, although fairly tired, after a half an hour break I feel quite 'up' for Step n Core. And even though I definitely found the class harder than normal, I find some hidden energy from somewhere and I complete the class well.

I begin to ache after I've showered and I have a feeling I'll be sore tomorrow....Correct! Ouch! Turning over in bed this morning I felt like I'd been beaten in the night. And actually getting out of bed I felt as though I'd aged overnight and awoken to a 90 year old's physique! Hmmm, not ideal. However it is nice knowing I've really worked out. I mean I can feel I've really worked out.

As for Boot Camp, I shall definitely be going back. Infact I booked on for next week after I finished both classes. Luckily though, Step n Core isn't on for the next two weeks, meaning I'll only have one class to attend on Thursday! I mean, I know I could just do one anyway but because I like them both I know I'd end up doing two every week.

I'd love to hear about any Boot Camp experiences out there?! ...Did you feel the pain the next morning, or is it just because I did two classes? I'm intrigued!

I guess I'll find out next week, if Boot Camp is the root cause of the aches or whether it's just a combination of both, though!

Hope you're all having a motivated week.
Posted by Unknown at 05:33