Hello. How are you all?

Right so, as you may know if you've been reading my blog posts, I've recently moved back home for the university Christmas holidays. Yes, we had like 4.5 weeks off this year... woohoo! And to be honest this is the first year that I wasn't actually overjoyed about coming back. Usually I couldn't wait to leave the grotty student house and return to home comforts, but this year I have a nice student house with even nicer housemates. So, i guess I've been having a better time.

However one thing I was looking forward to getting back into, was my much loved and missed exercise classes! I actually think I have a problem haha. I really love them :) As I said in my previous post, I'd been a bit slack on the exercise front of late so once home I quickly went about buying a two-week gym membership (it was easier this way as I'm not home long enough to sign up to a full contract again).

Monday: Core blimey (30 mins), Body pump (1 hr)
Tuesday: Spinning (45 mins), Zumba (1 hr)
Wednesday: Gym (1 hr 15 mins)
Thursday: Boot camp (1 hr), Step 'n Core (1 hr)
As you can see I went all out with my workout schedule and booked on for as many classes as possible, which was probably a bit too ambitious considering how little strenuous exercise I'd done of late. Basically I was asking for it! However, I did give myself Friday off. I felt this appropriate considering it was my birthday :) I turned 23!

I started off my regime well, finding Core blimey (basically sit-ups for half an hour) quite manageable. I'd say that I'm fairly strong in terms of abdominal or stomach exercises and as I often do my own floor workouts in the gym, it wasn't a shock to the system or anything.

As for Body pump, I knew this one would be tough. For anyone not familiar with this class it generally consists of using weights in different ways. There is a lot of arm action and sadly for me this always hurts as I have rather puny arms. However, I have got better since getting into exercise and I always try to use the weights in the gym, if only for a short period.

Tuesday morning I was a little sore and achy...to be expected really, but I was still able to pick up and swing my little 2 year old cousin around whilst babysitting him for the day, (he loves it!) so I definitely hadn't lost the ability to move my arms or anything!

Spin class was brill but my bum once again found the seat a shock to the system...why on earth they make the bike seats so damn hard I don't know?! And after nearly an hour of that I was pretty wiped when it came around to Zumba. I regularly used to do both classes during the summer with ease so the fact I found it a bigger challenge than usual told me my fitness had slipped somewhat. GRR!

By gosh...boy did it hurt to bend and sit down on Wednesday. Actually no, scrap that...it hurt EVERYWHERE! Being a sucker for pain though I guess, I was somewhat cohered into going to the gym by my sister that evening. It seems I've passed on the fitness freak bug. I decided I would take it easy and have a more gentle gym session, afterall a light gym sess is better than nothing at all! 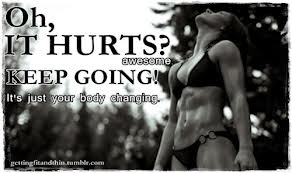 As it goes, I was very limited in what I could actually do when I got into the gym. After a short time on the cross trainer my legs really really started to ache and burn. The rowing machine made me realise how much my arms still hurt (probably from Body pump). Floor exercises created a lovely 'bruised' sensation to my abdominals. The treadmill turned out to be the best of a bad bunch where I was actually able to run for a considerable amount of time before flagging.

By Thursday I wasn't actually feeling too bad and the ill affects of the torture I'd performed on my body were starting to ease off. Boot camp was perhaps more intense than usual caused by the fact that only 3 people, myself included, turned up. This meant that you seriously couldn't get away with any slacking whatsoever, so it was a very grueling session. I enjoyed it though. Step 'n Core was as hard but as good as ever. Nothing out of the ordinary to note...Oh, other than the fact that the instructor made me and a few others do part of the class on a higher step. OUCH!

Friday. Happy Birthday to meee! So I awoke a year older, which was quite ironic as instead it felt like I had aged 60 years overnight. Yep...ACHING HELL! I was as stiff as board and got out of bed with the grace of a baby elephant!

I went out for a lovely birthday meal. I indulged myself with a burger and chips, followed by a treacle sponge and custard pudding (it arrived with a candle in the middle and to my surprise I blew it out about 3 times before my dad had to dispose of it in his glass, one of those re-lighting jobbies. Very funny!) I may add that I shared my dessert with my mum...my stomach can't quite hold what it used to despite my best efforts!

As for my birthday night...well this is when the aches really started to set in. I was literally hobbling around like a 90 year old (no disrespect to the elderly) moaning and groaning on every move. Sitting down was a real task. In the end I took some painkillers and had a nice long soak in the tub. Definitely recommend these steps in times of aching hell!