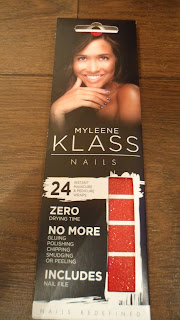 So I received this as a Christmas present from my friend Gina and was very excited as I've been wanting to try these nail wraps for a while. Unlike the nail foils, no heat is required and they are literally stickers to be applied to your nails. This made me doubtful of their staying power as surely stickers wouldn't withstand water?
Well I was wrong. Application was a little time consuming as positioning and filing them down to fit your nail was fiddly. Yet it did become easier as I went along. I would say that it took me a good hour to get them perfect. However once they were on...they were on. 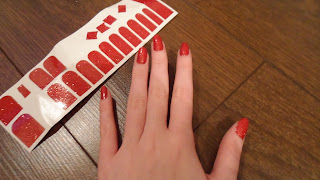 Not only did they look really nice but they certainly were heavy duty. They withstood long baths and even stayed in tack when I gave my hair a good scrub using the tips of my nails.
A few air bubbles developed over the course of wearing them so I did ocassionally have to push them down and smooth things over.
In total they lasted around 4 days but probably needed taking off on the 3rd night. My nail's tips were the first to lose some stickiness and began peeling. However I was very impressed that this didn't happen until day 3. I think they would be perfect for a special night out or as a treat but perhaps not for constant use.
Removal was pretty straight forward. I found peeling them off starting at the cuticles to be the most productive. A tiny amount of glue/stickery stuff was left on my nails but this was easily removed by soaking them in warm water and then filing any excess.
All in all I think they are a nice change to nail varnish and I would reccommend giving them a try. Perhaps for NYE?
Ellie x
Posted by Unknown at 13:57